Today marks Day 4 of my Resident Evil 7 – Biohazard play through. Will the scares be back as I edge closer to the games finale? Well, there is only one way I can find out…

Mia is now aware of Ethans location within the ship and heads off to find him. To do this she needs to solve a variety of puzzles to get the lift working and to gain access to keys and a machine gun.  This is now very much in the style of Resident Evil.  Using the reactivated lift, Mia descends into the very depths of the ship, evading enemies and adding to her inventory. Ethan is found trapped in the black matter that Eveline generates. Prior to Mia breaking  him free, Ethan has a vision of Jack Baker in his normal human form. In this vision Jack tells of how he found Eveline wandering out in the swamps. He took her in as one of his own, only for her to start using some power over them that they had no control over. He begs Ethan to kill Eveline, in doing so any hold she has over his family will be broken. In a twist, Mia frees Ethan from his restraints only to push him out of a door and locking him out. Through the door window, Ethan can see Mia start to transform again, she screams at him that he must go and kill Eveline, to end this horror.

In leaving the ship, Ethan is now back out in the swamp. He must follow a path through to a lift, that will take him down into a salt mine. Progression through the mine is occasionally hindered by the occasional enemy, but there is nothing too taxing and Ethan will eventually make it to a laboratory. It’s here that Ethan can conveniently create the E-Necrotoxin, the only thing that can stop Eveline. Moving deeper into the mine with the E-Necrotoxin, sees Ethan attacked by a lot more enemies of varying difficulty, but nothing that the excessive amount of remote mines lying around can’t solve. The end of the mine sees Ethan find a ladder that he climbs to find himself back in the basement of the Baker House!

For me, this following section was back to what the game did best, there was so much atmosphere. Essentially, Ethan is walking about the house triggering flashbacks, there is no combat nor real puzzle solving. You were back in the creepy old house, and the tension was rising. Loved it! It’s only after triggering 5 or so of these flashbacks that you find yourself in the attic with Eveline. It’s here you block her attacks and administer the E-Necrotoxin. Eveline ages dramatically and turns into the woman in the wheelchair who  I assumed was the Bakers Grandmother. She screams, and melts into the floor, only to reappear as a giant face at the back of the room. All Ethan needs to do is unload as much weaponry in her as quickly as possible to beat her. If you fail, you die in a scene that immediately reminded me of the following scene from Nightmare On Elm Street 3… 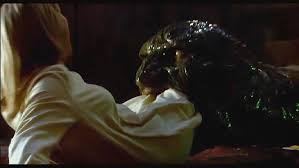 If you do die, the game gives you a chance to reevaluate your inventory and to load up on fire power. I used a combination of Grenade Launchers and Machine Gun. After damaging her enough, you are thrown out of the building and see the Eveline mutation burst out after you. She has tentacles that attack you and  are also used to cover her face, the weak spot!

This sequence was a bit of a let down, it’s essentially a QTE! You need to fire at her face a few times, after which a new scene triggers that sees you able to conveniently grab a new weapon, which you can use to ultimately defeat Eveline.  Chris Redfield appears who takes you back to an Umbrella helicopter, which also has an injured Mia in it.

So there you have it! Day 4 saw me complete the game in just over 12 hours.

I would absolutely recommend this game to anyone, especially fans of the series. For all its promises in the very misleading demo, this is absolutely a Resident Evil game, not some massive reinvention (bar the perspective). The first few hours were absolutely the games best moments, I was on the edge of my seat, seriously considering if I should be playing with the lights on. Maybe in playing you get desensitised to the effects of the scares, but I’m not so sure this is the case.  Was the opening psychological horror of the game only added at the last minute? Spliced into a pre existing Resident Evil game? For me there does seem to be a fairly obvious split from the opening few hours where you are fearful of even looking round a corner in the dark, to brazenly running about like you are in an episode of Challenge Anneka. Running from A to B, solving a puzzle then back to A again. Enemies in the mid section of the game seemed underpowered, they weren’t a threat. Once you figure you can run past them, that’s all you did. They even oddly disappear permanently if you enter certain rooms, which is handy yet daft. Whilst I’m focussing on problems with the game, there were a few moments of annoyingly convenient plotting. So convenient, even in the heat of battle I was rolling my eyes, thinking ‘as if’  (The end game mega weapon , the lab with the E-Necrotoxin) The relationship between Ethan and Mia was oddly written, they are a married couple yet  it was so underplayed, Ethans lack of reaction to finally finding Mia after she was missing for three years, presumed dead, was odd.

Negatives aside, this was great fun to play. As I said back on Day 1, I’ve not played a RE title for years, and this pulled me right in from the start, although not the game I was expecting it to be, this is a fantastic reboot of a series that appears to have been struggling.

I have high hopes for the next chapter in the Resident Evil series.