In an ongoing series, I thought I would do a feature on some of my favourite short story collections.

I can think of no better place to start, than possibly the most famous set of short stories committed to paper…

The Book Of Blood

65 Tollington Place is a haunted house. The room at the top of the house acts as a crossroads, a doorway between their world and ours. So what happens when a charlatan medium enters the house? 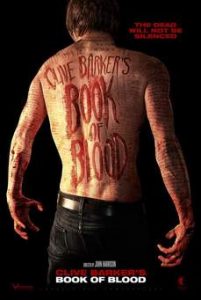 Brutal murders are happening on the late night New York City subway. Leon Kaufmann quite literally wakes in the middle of another killing spree. As the evening progresses he learns that there is a purpose for these murders, the City Fathers need meat!

The Yattering and Jack

A minor demon is under orders to drive Jack Polo insane, this comic tale shows the lengths he will go to succeed. Trouble is, Jack’s not cracking.

When former police officer Redman starts working at an incredibly strict borstal, he hears rumours of ghosts and of young offenders going missing. Redmans investigations show something is not quite right about Tetherdowne, and then he discovers the pig sty.

Struggling theatre director, Leroy Townsonio is having an affair with his leading lady, Diane Duvall, who is a terrible actress. A mysterious man in a mask ,Mr Lichfield, tells Townsonio that his wife, Constantia, would make a better leading lady. To be fair, Townsonio is only keeping Duvall employed because of her publicity boosting association with a soap opera. The main issue with the mans suggestion is that Constantia is dead! So who will be the leading lady come opening night?

In The Hills, The Cities

Whilst travelling, Mick and Judd find themselves witnessing a ritual. Every ten years, two Eastern European cities, Populac and Podujevo, create giants by binding together the bodies of its citizens. Forty thousand people strapped together as tall as a skyscraper. This is not because the respective populations dislike its other, it’s a tradition. This decade, it’s going to end very differently!

As a whole, the Books Of Blood is an astounding release. Its stunning to think that this marks Barker’s debut. Volume 1 may not have my favourite stories in, but it sets the stall out perfectly for the next five volumes. Usually consisting of ordinary people in extraordinary situations, faced with occasional unblinking ferocity. The drama is often horrific, outlandishly so at time, but its not schlock. It’s written so beautifully, it flows off the page , it’s poetic. Stephen Kings tagline is understandably dug out every time a Barker review appears, ‘I have seen the future of horror…and his name is Clive Barker’. In the Books Of Blood there is so much more to Barker than just horror,  he is a genre blending genius, who  is a visionary and world-class story-teller

The official Clive Barker website can be found here